I’d never think to have a pet as ferocious looking as a badger. They have fearsome claws and are noted for their digging. My mom was given a baby badger back in the 1930s and she raised it and kept it as a pet.

She tells some remarkable stories about what it was like to have a pet badger. Here’s more information about the American badger and more about her pet badger.

Mom took this photo at a museum. She said it reminded her of her pet badger, Jolly.

An Unusual Pet – An American Badger

Young Gail McGhee in front, center. The shed in the background might be the wash house that the badger lived in, where he dug tunnels in the dirt floor.

Gail Martin describes in her book how they raised the badger as a baby. This video shows a European baby badger, but it would have looked pretty similar to this.

Great Video of a Badger

Note that it has a harness. It also digs just like my mother described her pet badger digging in their potato patch. A collar didn’t work for the badger as it would just slip off over its head.

Here’s a comment on Mom’s story by JenaleeMortensen, “I steer clear of angry badgers. I was very young when I watched one charging at my father all teeth and claws. It’s hard to imagine having one as a pet. Thanks for sharing your story of a pet badger.”

When I helped my 86 year old mom self-publish her childhood memories, I also took on the job as PR person for the book. I posted blurbs all over the Internet, sent postcards to libraries and helped arrange author talks and book signings.

We sent this postcard to libraries in Kansas to promote my mother’s memoir.

One fun way to promote the book was with a t-shirt. You can get these printed up locally or use a site like Zazzle or Vistaprint. Get everyone in the family to wear the shirts. Have them prepped to talk enthusiastically about the book when someone asks them.

A sunflower seemed like a good match for a Kansas memoir. I ordered this t-shirt from Vistaprint to promote My Flint Hills Childhood.

Make sure they know where people can buy the book too. With the t-shirts, friends and family can become walking billboards promoting the book. Besides being available online (see below), we made the books available at the Kansas Oil Museum in El Dorado, Kansas and at the Greenwood County Historical Museum in Eureka, Kansas.

Have you written a book? If so, then you know that promoting the book is a lot of work. 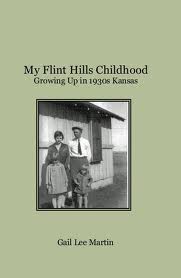 Mom’s stories plus some of mine and my sisters were compiled in this book about my dad. 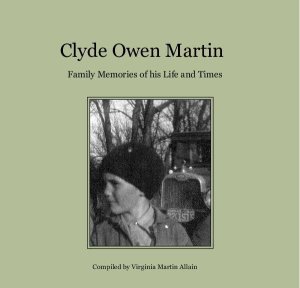 The book about Dad is also available from Blurb.

The recipe has gone around the world with me. As I pulled it out today to make my “Texas” banana bread, I took a minute to read the notes I’d jotted down over the years. It looks like I first made it in 1991 when I was newly married and living in Ahmedabad, India. Another note shows that I made it for my daughter’s 4th birthday party in July of 1994, still in Ahmedabad. In 2008 I’m divorced and back in Kansas, still using this recipe. At some point, my daughter started adding her notes to the recipe as she began baking. She was the first to add a lemon glaze to the bread. I see that I substituted 1 cup of dahi or curds (plain yogurt) for some of the bananas when I was short on bananas one time.

The recipe is from a cookbook my aunt gave me for Christmas back in 1978, when I was living in Wichita, Kansas, and she was a new Texan. She was working as a typesetter in Austin and The Wide, Wide World of Texas Cooking is one of the books she worked on. When I moved to India to marry, it was one of the few books I packed to take with me. It was my go-to book when I was homesick for American food.

Tonight I spent some time flipping through the pages of the book and realize that it’s a veritable journal of that part of my life. I’ve never been able to keep a real journal for more than a few days at a time (despite good intentions!), so it’s a delight to see that I WAS actually keeping a journal of sorts during those years.

Recipe for Pecan-Banana Bread. Yes, the notes on the recipe do evoke memories.

The first note in the book dates to the time before I moved to India, when I was single and living in Wichita, Kansas: Jalapeno Buttermilk Cornbread (served with country spareribs) in Wichita before I moved to India. The note is brief, but I vividly recall serving this meal to my parents and my brother in my apartment along the Arkansas River in Wichita. Dad was a big fan of the jalapenos, but Mom and Owen would have preferred plain cornbread. My parents are both gone now and my brother is in a nursing home, partially paralyzed from a stroke, so these are bittersweet memories of a happier time.

My first years in India show that I must have really been missing American breads and pies! I made Flannel Cakes, Sour Milk Cornbread, Amarillo Risen Biscuits (for Easter), and Butter Biscuits. Pies just weren’t something you found in India, so the only way to get my fix was to make them myself and, boy, did I! Apple Cream Pie, Osgood Pie, Pumpkin Custard Pie (from fresh pumpkins from the market), Oatmeal Pie, Fried Pies (that page is really grease-spattered!), Old-fashioned Egg Pie, Lemon Chess Pie (I substituted rava, which is coarsely ground rice, for cornmeal), Lemon Meringue Pie, Buttermilk Pie, and Banana Cream Pie. These would have been served with chai in the afternoon or for dessert after an evening meal.

Karen with her daughter.

The notes show that I managed to celebrate American holidays in a traditional way during my years in India. For my first Thanksgiving and Christmas holidays, I made Baked Hen with Dressing, Buttermilk Pralines, and Date-Nut Roll, which I wrote was “like Uncle Glenn’s recipe.” I also found recipes that reminded me of my Mom’s cooking when I was growing up, such as Mrs. Spitzenberger’s Apple Oatmeal Strudel, which I noted was similar to my Mom’s apple crisp. Another recipe was for Cinnamon Puffs, “like Mom’s cake doughnuts she used to make on the farm.” I remember teaching my Indian cook how to make egg noodles, but my daughter liked to be the one to cut the dough into noodles, just as I did when I was her age.

The banana bread is out of the oven, cooling on the kitchen counter. And I make another entry in my well-worn recipe book/journal before I return it to the bookshelf. In the fall, the cookbook will be packed away to make the journey across the country with me when I move to Kentucky to start a new stage in my life. I’m enjoying the adventure!

To follow Karen’s adventures in Kentucky, check out her blog, Kentucky Day Trips.

My mom’s pot roast made a fine meal with the meat fork tender and the vegetables full of flavor. After 40 years of practice, I turn out a roast beef dinner that would make my mother proud. Here’s how to make it.

Start preparing the meal about three to four hours before you plan to serve it. The meat needs to cook very slowly. Adding the vegetables slows down the cooking too.

You want some marbling in the meat to keep it moist and tender.

Rinse off the chuck roast. Pat it dry with paper towels. Put flour on a plate and turn the roast to coat all sides with the flour.

Put some oil or shortening in a frying pan. Turn the heat pretty high to get the oil hot. Tilt it so the whole pan is oiled. Put the roast in the pan to sear each side. This seals in the juices for the roasting. Turn it with tongs, not a fork. You don’t want to pierce the meat.

Brown the meat first to seal in the juices.

Put a teaspoon of flour in a cooking bag and shake it to coat the inside. Put the meat inside. Add red wine or water, maybe 1/2 a cup or more. Throw in some bay leaves. Tie the bag shut. Cut slits in the top. Put it in a deep pan in the oven at 325 degrees.

Start peeling the carrots. Cut them into finger lengths. Add these in with the roast.

Peel and cut up the potatoes (quarter these) and onions (halve these). Wait about two hours from the start time to add the potatoes and onions. Set out the green beans to thaw.

I fix enough vegetables so we can have the pot roast for several meals.

Throw in some rosemary and thyme or other fresh herbs. Wash the mushrooms. Leave them whole. Put them in about 30 to 45 minutes before serving time. Put in the thawed green beans then also. 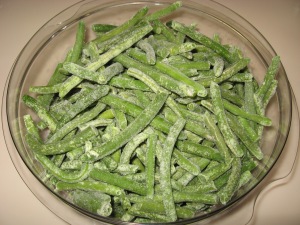 I use frozen green beans, but Mom’s would be fresh picked from the garden.

The roast is done when all the vegetables are fork-tender and the meat pulls away easily when poked with a fork along the edge.

Slit the top of the bag open and carefully remove the meat and vegetables. Take the meat drippings and wine left in the bottom of the pan to make gravy.

Set the table for your roast beef feast.

Ready to eat the pot roast and vegetables. My favorite meal.

Tips & Warnings
Each time you add vegetables check that there is some liquid in the bag. Add more if it seems dry.