Remember Mom Saying: “I’ll Give You Something to Cry About.”

Actually, Dad said this too. Most likely, you were already crying over something and it upset them. They would say, “If you don’t stop that crying, I’ll give you something to cry about.” It was really hard to stop crying but with this threat, you made a real effort to pull yourself together.

I’m sure with six of us, it must have been a trial dealing with our fussing and crying when we couldn’t have something or didn’t want to do something.

Something to Cry About Magnet by TotallyRetro

Here are more to trigger your memories.

Don’t Make Me Come Up There –

I particularly remember my mother saying, “Don’t make me come up there.” This applied to times when I or my siblings didn’t respond promptly when called. Maybe we were needed to help prepare dinner or it was time to get ready for school or leave for church. Mom would call up the stairway with her request and we might answer, “in a minute, Mom.”

Then, we would stretch that minute for quite a while. Sometimes, I was reading and just had to get to the end of a chapter. After one or two reminders, Mom would stand on the bottom step and resort to the threat of coming upstairs. At that point, we knew our time was up and her patience was worn thin. 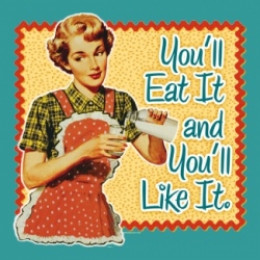 Remember all the sayings your mom had handy for all occasions? Those are called momisms. They were handy to remind children of proper behavior or perhaps just uttered in desperate moments as your mom reached the end of her rope.

I’ve gathered some of these universal slogans that I heard from my mom and you probably heard from your mom. Enjoy this trip down memory lane with these momisms. If you don’t see one that you remember, add it in the comment section.

The classic shown above, “You’ll eat it and you’ll like it,” reflected a time when moms didn’t have the time and huge selection of food on hand to cater to a kid’s eating whims. Mom fixed a nutritious meal and we were all hungry enough to eat every bite. We learned to eat what was put on the table and not to whine for something else. If you were still hungry, there was always more bread and butter or bread with gravy to fill your tummy.

You know that look on your mom’s face: lips pursed, shaking her finger at you in admonition, she would say, “Now, don’t get smart with me, young lady.” If you continued to push your point or request, the situation could deteriorate rapidly.

Your best bet at this point was to back off and return to the issue another time when Mom might be in a more mellow mood.

If you say something unwise, your mom might say, “What did you just say?” You can tell by her tone of voice that you are in huge trouble if you repeat it.

Retro Housewife Card | Don’t Get Smart With Me! by Whatsbuzzin

I have a batch more of these, but I’ll spread them out and give you time to savor them.

The boom of fireworks drew me outside. In the distance, through the trees, I glimpsed a burst of light in the sky. Two days before the 4th of July and apparently, people have money to burn.

Long ago, we celebrated the holiday in a modest way on the farm in Kansas. At the fireworks stand, we selected pinwheels, snakes, sparklers, bottle rockets, and ladyfingers. These were considered fairly safe for school-age children. They carried more lethal and more expensive fireworks like cherry bombs, but we never bought those.

We lighted a punk, and used that to set off the small firecrackers called ladyfingers. We were cautioned not to light them while holding the tiny cracker in our fingers. So we placed it on the ground and lit the short fuse with our smoldering punk, then we leaped backwards to wait for the explosion. Later, we gathered the scraps of paper left from the ladyfingers. We marveled at the Chinese characters printed on the small bits remaining.

The snake required a match to start it. The small charcoal-colored button extruded a long dark, curving ash as it burned. That was the “snake.”

Pinwheels required nailing to a post or tree. Once the fuse was lit, it whirled in a circular pattern, spitting fire. It was done in just seconds.

I gathered my memories into a poem.

Lemonade, corn on the cob, and hot, hot days.

The sputter of small firecrackers and swish of pinwheels.

Setting the dry grass on fire in our backyard.

Creating fiery circles in the dusk with a sparkler in my hand.

I remember long ago July fourths,

The sparkler is as bright as ever.

For the 52 Ancestors challenge, I chose this photo of my mother, Gail Lee McGhee, with her family. Although this one is cropped so part of the words are missing, I know the label said, “Ruth, Clarence, Melba and Gail – J.W. Teter lease. 1928.” Photos showing a family and their home tell us so […]

The theme this week for the 52 Ancestors Challenge is “I’d like to meet…” The person I’d like to meet is an unidentified person in our family photo collection. Who is this mystery child? If I stood face-to-face with the little girl, I’d say, “Hi, what’s your name?” Hopefully, she would reply with “I am […]

WWII Kansan and his P-38 the Jayhawk

By Gail Lee Martin Flying with the Photo Reconnaissance Squadrons during World War II, Ralph Martin, a farm kid from Greenwood County, Kansas felt like he was mapping the whole world. Leaving the farm and home in 1941, Ralph went to Wichita to work at Boeing to do his part to help win the war. […]