What happens to a dream deferred?
Does it dry up
like a raisin in the sun?
….
Maybe it just sags
like a heavy load.

Langston Hughes wrote these lines in 1951 and I’ve been thinking of them a lot this past couple of years. I started out thinking of them in relation to the situation I was in, which I wrote a bit about in a piece on the Bubblews site: I Was a WalMart Cashier.

However, those thoughts would always lead me to my Dad and his deferred dreams. While my situation was temporary and an aggravation, my Dad’s dreams seemed to have been snuffed out, one by one, as a young man. I’m sure when he began working in the oil fields as a young husband and father, he had no idea that he would be doing that hard, physical labor his entire life.

He came of age during the depression and was of draft age when World War II came around. Since his older brother enlisted in the Air Force, Dad was given an agricultural deferment because he was needed on the farm. His older brother’s experience led him to bigger and better things after the war and he never returned to the farm and only rarely returned to Kansas to see the family.

As the war ended and Australia opened up to immigration, Dad thought about moving there. Instead, he married my Mom and by 1946 had the first of six children. 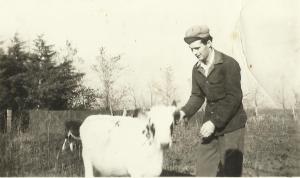 Clyde Martin with an Ayrshire calf.

As a young couple, they started a dairy operation with an Ayrshire herd, only to have that dream dashed when, after a particularly rainy season, mastitis spread through their herd. State health regulations forced them to sell the herd as butcher cattle at a loss.

For a short time, he and a younger brother operated a gas station, but it wasn’t bringing in enough income to support two young families.

That’s when Dad took his first job in the oilfields. Although by the time he retired, he had advanced to supervisory positions such as tool pusher and production manager, most of his career was spent doing the dangerous, back-breaking work of a roughneck.

Clyde Martin, just home from work and still in his oil stained clothes. Gail holding Shannon, their youngest child.  Around 1959.

Later in life, he suffered greatly from the pain of old injuries and severe hearing loss from working around the loud drilling machinery all his life.

I’m glad my Dad had a good, long retirement before he passed away at age 87. He made up for lost time in those years. He and Mom bought a small RV and some vacation property on a fishing lake, they gardened and canned and enjoyed the farmers’ market, Dad became a bread baker extraordinaire, they read lots of books and watched lots of baseball and ice skating on tv, they enjoyed their kids and grandkids, and they traveled. The dream was no longer deferred. Rest in peace, Dad.

(This tribute to Clyde Martin was first published on Bubblews by Karen Kolavalli. The site is now defunct, but it seemed appropriate to republish it here as Dad’s birthday approaches.)

One thought on “A Dream Deferred”