A short post in the Madison News in 2011 sparked some family discussion about wolf hunts in Kansas.

“There will be a wolf drive southeast of Lamont Sunday, sponsored by the 4-H club. The roundup will be in the Crotty section.”

Karen commented that Mom (Gail Lee Martin) had talked about the wolf drives. “Seems like Norman (her brother-in-law) was in the story. I should have been writing these stories down as soon as she told them.”

Karen asked our cousin, Tim (Norman’s son), “Do you remember wolf hunts at all?”

Tim said, ” Yes, I remember them. I even carried my BB gun if I remember correctly before I was old enough to carry a shotgun.”

She then tried to draw out more, “Well, now I just want to hear even more! Did you do it with the 4-H club or was it just a community thing? Was there really such a problem with wolves in Greenwood County in the ’50s?” 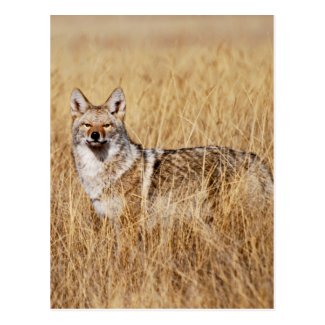 That triggered Tim to dig deeper into his memories, “Not wolves, coyotes, and usually some group organized the hunts. Kind of a community thing. The boundary lines were posted and men lined up around the perimeter and walked toward the center. Sometimes each side would be more than a mile or two or three. Coyotes would be driven toward the center and shot when they tried to escape the circle. I remember seeing piles of coyotes.”

Karen wondered, “I only had the snippet of the article that they printed 60 years later in the Madison News, not the actual article (January 18, 1951). Maybe the Madison News has it in their archives though. Was there a bounty on the coyotes? The whole process sounds really barbaric, but were coyotes a big problem for farmers?”

Here’s Tim’s answer, “Yes, the coyotes were a big problem, stealing chickens and other poultry, lambs, and calves were prey to them also. I know we lost some lambs to coyotes. I remember a neighbor who lived north of us telling of seeing a coyote kill his pet cat just for fun. The thing that probably ended the “wolf hunts” was that some people got carried away and would shoot other wildlife such as jackrabbits, owls, hawks and such. Also, I seem to remember an accidental wounding of a hunter a time or two.”

After rediscovering Karen and Tim’s discussion on the Our Family site, I researched in old newspaper databases. I found these articles in the Chronicling America (Library of Congress) online newspaper database. Some were huge events, but others were unsuccessful in reducing the coyote population. Sometimes the participants were injured or even died.

“During a recent wolf hunt in Sumner County, not a single wolf was seen.”

KANSAS CITY, -An enormous wolf hunt took place over Crawford and Bourbon counties in Kansas Saturday. As a result, about 300 wolves lie dead. Both counties and others adjoining were scoured by over 5,000 men, women, and children, armed in all conceivable ways. Two thousand jack-rabbits were also captured in the general round-up.

Owing to an error in signaling there was one break in the line which reduced the
number of captures, but another hunt will take place next Saturday to finally wind up
the foxes and wolves of southern Kansas. There was but one incident, Thomas Per

There was but one incident, Thomas Perkins being very seriously bitten by two
wolves. he will not recover, as he was torn fearfully by the infuriated animals.
The hunt was divided into four lines, each having more than a thousand men in
the party. Each side was fifty miles long, the square working to the central round-np.
Under the plan, the lines moved toward a hollow square. The west and north lines
moved about four miles and then awaited orders, while the other lines pushed in
more rapidly on horseback, driving the wolves, foxes, and jack rabbits in front of
them.”

Wolf Hunt.
“The Southeast Sumner Hunting Association wish to celebrate Lincoln’s birthday, Friday, February 12th by having a wolf hunt in Green township. We will drive the entire township forming on the outside lines and commencing the drive promptly at 9:30
o’clock under the command of Wm. Massey on north line, Wm. Jordan on West, Dick Brooks on south and Sim Wartick on east.

Everybody turn out and bring all your dogs and shot guns, rifles debarred. There is no doubt that we will have a good time as there are quite a number of wolves positively
known to be in the township. Should the weather be bad the hunt will occur on the same day of the next week. By Order of Association.”

(I missed noting the date on this next article. Kicking myself for being careless.)

Sportsmen Came from England to Take Part In Annual Hunt.

“The West has one diversion unknown In the East and one which Englishmen come across the waters to participate in. It Is the annual “wolf drive” held each year on the prairies and which is the sole remaining relic of the famous wild hunts of thirty or forty years ago, says the Wichita correspondent of the New York Herald. While not as voracious as in former years, the coyote, or prairie wolf, is still capable of doing considerable depredation and is the worst foe the prairie farmer has to contend with. The animal still sneaks into the hen roosts and waylays lambs and calves in the field. As a consequence wolf drives are held every year, a sort of general roundup for the “varmints.”

The biggest wolf drive ever held In the West was participated in last Saturday by over a thousand horsemen bent upon obtaining the scalp of every wolf in the territory they covered. It was held In Sumner county, on the border line of Oklahoma, and a whole township was freed from the pest.

It was a motley array, farmers and farmers’ boys mingling with hunters and sportsmen, some of whom had come from England and Canada to take part in the sport. Each man was armed with either rifle or revolver and many with both, while dogs without number yelped and raced around.

At the appointed hour the word to advance was passed along the line, and the drive began from the confines of the township inward toward the center. As the lines advanced they routed the animals from their biding places, and the gaunt form of the prairie coyote was to be seen loping in ungainly but swift fashion far ahead of the horsemen and out of reach of the swiftness of the wolf hounds.

As the day progressed and the hollow square became smaller the wolves began to realize that their pursuers were bent upon their destruction, and they began to try to break through the ranks. Here was exhibited many an illustration of the subtlety of the prairie wolf in doubling upon Its enemy. A pack of dogs would be pushing after its prey too closely when suddenly the wolf would disappear. It had used a device well known to the coyote tribe and “doubled on its track”—turned square around and raced back alongside of the dogs—and before the pack had discovered what had happened the coyote would be rods away.

When the lines were within sight of one another the order to halt was given, and the dogs urged on to the work of extermination. While every man was well armed, few shots were fired, it being the custom of the drive for the dogs to do the killing. But if a wolf seemed likely to break through the cordon it was shot.

When the last wolf had been killed the carcasses were gathered In a heap and skinned. They counted up to four hundred.” 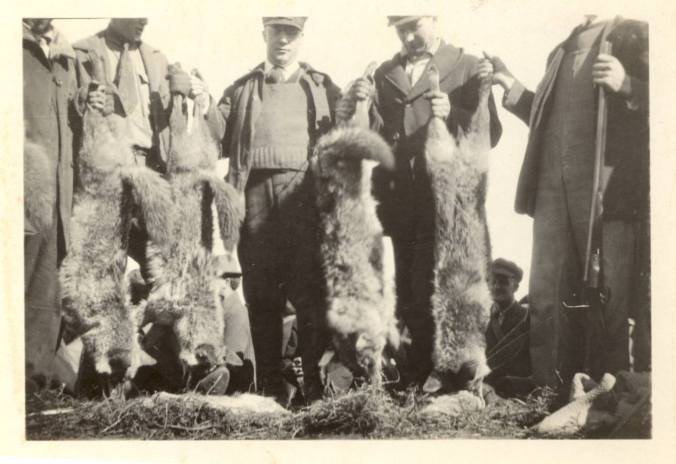 Photo shared by Wendi Brevitt on Facebook in the Kansas History Geeks group. In Wabaunsee or Clay County.

In 1913, the Topeka State Journal reported, “One of the traditional wolf hunts in Kansas is thus described by the Holyrood Banner: The wolf hunt scheduled for Monday morning was well attended by our marksmen, who faithfully plodded over two sections but to no avail. The wolves were all hiding or had beaten it to a more healthful climate. The only thing seen by the hunters were a few rabbits but they had been practicing; for the event and were beating it at about a 2:10 gait.”

Read more newspaper clippings and history of wolf hunts in my article at Hubpages.

One thought on “Kansas Wolf Hunts”