Gail Lee Martin loved researching family history and she’s passed that passion on to several of her daughters, including me. She tracked her McGhee line laboriously through letters and visits to courthouses, libraries, and cemeteries in those pre-Internet times. I’ve been retracing her steps, but using online resources, to see what further can be discovered.

In doing so, I joined a Perry County history group on Facebook for Arkansas. While asking about the McGhees there and sharing some photos, I’ve met some distant cousins who shared their ancestors with me. This photo shows Florence McGhee who married William J. Marshall in 1910. 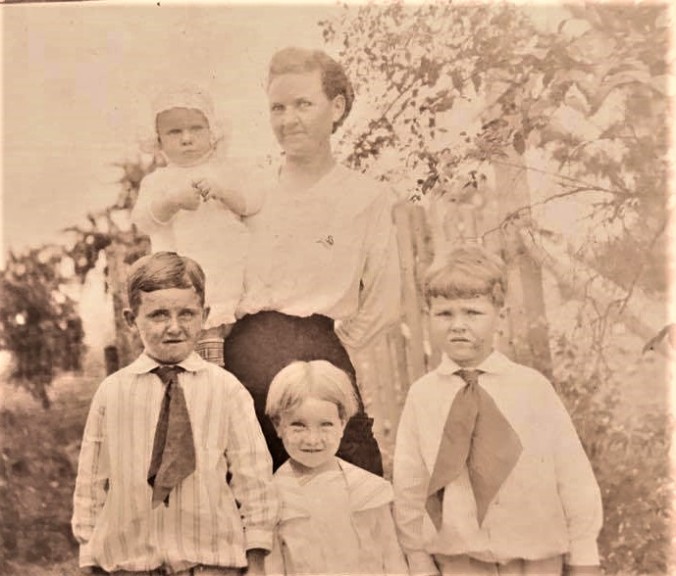 My thanks to Dana Mattingly Craft‎ who provided this picture. Information from the back: Florence McGhee Marshall with children: Robert Marshall (in her arms), Willie “Dane” Marshall, Doyle Marshall (retired from the navy around 1950), Kenneth Marshall (killed in service on December 16, 1941 around Honolulu, Hawaii while piloting an airplane off a carrier for the Navy).

This photo had to have been taken prior to or in 1918 as Florence and Dane died at the end of 1918 as did her one-month-old infant.

In looking at this photo of Florence, it reminded me of a 1940s photo of my mother, when she worked at Boeing. Do you see the resemblance?

This sharing of information led to another connection who surprised me by colorizing Gail’s picture. I think Jenny S. Henry did a marvelous job and I greatly appreciate her skill and willingness to share her talent.