My big sis asked me about my memories of the Martin family oak table that’s been handed down in our family.  I know now that it came from Dad’s parents and I assume we got it at the time Cora and Ren downsized and moved to Emporia for their retirement years.  That would have been when I was a child and, really, I don’t remember a time that we didn’t have it.  I think we must have gotten our cherry slant-top desk from them at the same time.

This was back in the 1950s and our family was the typical one, where Dad was the breadwinner and Mom was the homemaker.  Meals–all of them–were eaten together as a family at the big, round table in the dining room.  Since we were a family of eight, at least one of the two expansion leaves was left in place during those years.  It was very rare for us to eat out at a restaurant, either sit-down or drive-through.  We did occasionally have picnics.  But other than that, we ate at home at that table!

I like knowing that this is the table my Dad grew up with.   His family was even bigger–eight children–but the table was big enough for them, too.   I think it’s likely that the table was purchased from the Sears catalog.  Sears started selling quarter-sawn oak extension tables of this type around the turn of the last century.

Advertisement from 1922 for an Oak Dining Table 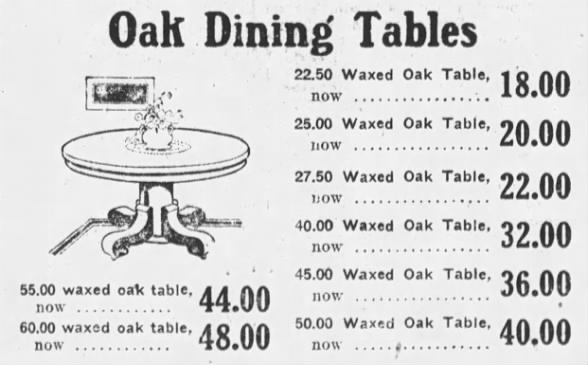 Now the oak table has been handed down to my family.  When I downsized in my turn at the time I retired, I handed the table down to my daughter.  That makes her the fourth generation of the family to have this 100-year-old table.

One more view of that table. This photo is from 1957. That’s our dad, Clyde, and his younger brother, Howard Martin. They grew up with the table and then it came to our family and we grew up with it, too. I see that they are playing cards which all of our family loved to do. Also on the table are some packs of cigarettes. I think Dad smoked Camels. I’m not sure what’s in that bowl, maybe snacks.

One thought on “Karen’s Memories of the Round Oak Table”