My mother, Gail Lee Martin, grew up in the 1930s but was more fortunate than many as her father had a job during those hard times. Working for Phillips Petroleum, meant his family had a company house to live in and a nearby school to attend.
A friend of mine spoke to a classroom of school kids for Black History Month. She told them about what it was like to go to a segregated school in South Carolina with outdated textbooks and limited supplies. Her explanation included memories of children who could not attend school when it was cold and rainy since they didn’t have enough coats and shoes for all the children in the household. 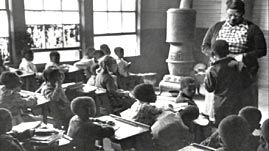 The school for whites had a bus that picked up the children in rural areas. The black children had to walk a great distance to their ramshackle school. Some children had to stay home to help with farm chores so the family would have enough to eat. This was in the 1930s and 1940s and based on things she personally experienced.
She told them how things changed in the South when court cases finally forced integration and equal education no matter what race someone was.
When she asked if they had questions. One girl raised her hand and asked, “how did they get their nails done in those days?” Sadly the concept of history and what life was like during the Great Depression was beyond her imagination.
Here’s the book that my friend wrote about her father, who was a minister, and the Supreme Court case that actually laid some of the groundwork for the Brown v. Board of Education case and events in Kansas.

I saw a vintage photo of men in suits lounging on deck chairs. Although my grandfather, Clarence McGhee, made two ocean voyages, they weren’t on cruise ships with lavish buffets and deck chairs. Those voyages were aboard troopships that carried him and other doughboys to France in World War I and then home again in 1919 when the carnage ended. Instead of a suit, he would have been wearing his U.S. Army uniform.

It was years later that my grandfather had the opportunity to lounge in a deck chair. Far from the ocean, he leaned back with a magazine to read while soaking up some Kansas sunshine. From the size of the magazine, it might be an issue of Look or Life or Saturday Evening Post.

Shoes off and shirt sleeves rolled up, he is completely relaxed. His dog gazes adoringly up at him. In the background, a kitten plays. I don’t recognize the building and I need to check the year on those cars to give me more insight into the time and place.

It’s the time of year when high school students start counting down the days until graduation. Free at last, they think. We won’t warn them that as they enter adulthood, it means having the many responsibilities that go with being a grown-up.

Gail McGhee is right below the school logo.

It was the same back in 1942, but there was the additional responsibility of World War II. Young men after graduation were likely to go into the army or navy or another branch of the service. Training for war and coping with the discipline of the military would far exceed any restrictions placed on them by school assignments or a stern teacher.

Here’s the graduation program from my mother’s high school. She looked forward to leaving school behind as she considered herself ready to help in some way, anyway she could, with winning the war. She wanted to do more than just collect scrap metal or cope with ration stamps. You can read her own words about that last year of high school, the bombing of Pearl Harbor, and her graduation in her memory blog, Discovering Mom.

The graduation took place on May 19, 1942. The Reverand Melvin A. Good gave the invocation and later the benediction. Mr. C.R. Jones presented the diplomas. There’s no indication of his status, perhaps the principal or a school superintendent.

Here’s the fairly short list of those graduating. I see Gail Lee McGhee at the top of the second column.

All pictures from my family archives.

My mother said it was not the fashion of the time to wear long dresses for graduation. She never mentioned wearing a cap and gown, so not even sure that was part of the event.

Over the years, Gail’s parents took a vacation not far from home. They camped along the Cottonwood River to fish, swim, pick berries, and enjoy nature. The photo below shows my mother getting really close to nature at a young age. I’d date this photo as about 1928.

I don’t know if this was every year that they took these excursions. It must have been over quite a few years because here are my grandparents in a boat on the river. We can date it about 1950 as also in the boat is my mom’s younger sister in her teen years with a school friend.

This story came to mind after seeing the Sepia Saturday inspiration photo for today (below). I could only find the one boat photo in the family album and certainly none with canal boats or 200-year-old houses.