This advertisement is from 107 years ago. Perhaps my dad’s parents might have been there for the band concert and the fireworks. Only 25 cents for the entire day of activities. There were horse races, a parade, airplanes, a comedy, a band concert, and fireworks. 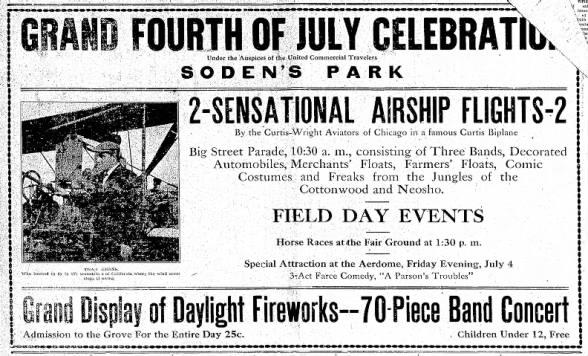 Charles Lorenzo Martin would have been 22-years-old and living in Madison. Cora Joy was younger, about 17. They were married two years after this. Perhaps Ren Martin escorted Cora to the event or maybe each attended with their own family.

The photo below is before the time of their marriage as it is labeled with Cora’s maiden name. Obviously, it isn’t in July as everyone is bundled up. Here are the names to go with the faces: (left to right) Phaedra Steele, Rufus Beach, Mary Freeman, Clarence Hoobler, Cora Joy, and Ren Martin.