My older brother, just a toddler, had a jumper chair back in 1946. We have the picture of him looking quite happy being able to bounce up-and-down and kick his feet in this device. He is outside in the yard and his eyes are fixed upon either mom or dad. It’s likely that one is trying to hold his attention while the other parent takes the picture.

It must be summer as he is dressed in lightweight clothing but on his feet are the sturdy baby shoes of the era. Mom had labeled the photo “1946 – Owen in his jumper chair.” Since he was born in February 1946, he would be about 6-months-old in August of that year. Does this look like a 6-month-old or would it be from the next year? In June 1947, he would be 16-months-old.

I was curious about the chair and found an advertisement for it in a 1946 newspaper.

The modern jumper chair for any baby 3 months and up. Ideal for home, auto or anywhere, so mother can be relieved. Positively safe. Convenient foot rest and play beads. 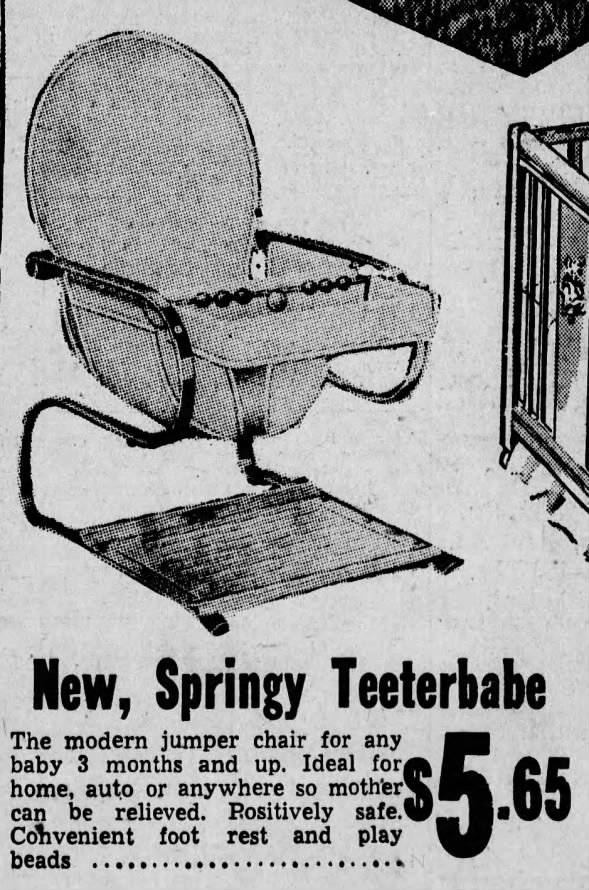 This looks identical to the chair that Owen is sitting in. Just imagine putting this in your auto today to take your toddler for a ride. “Positively safe,” the ad says, but we know better now.

I found a later advertisement for it and it touted the benefits of the child getting natural exercise and not bothered by constipation. Baby will be happy and contented and can be placed in the yard to get sunshine. 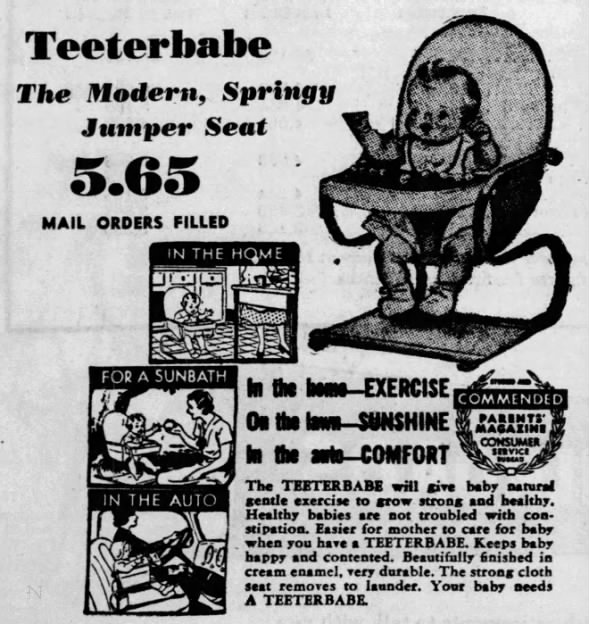 I’m featuring my brother’s picture today as part of the Sepia Saturday blog challenge. The inspiration photo showed a man jumping at the beach. That led me to my brother in his jumper chair.

Mom used to make ham salad for a sandwich spread back in the 1960s. It’s what they call Poor Man’s Ham Salad because it used a chunk of bologna, not ham, that was ground up for the spread. We called it baloney, and looked forward to those tasty sandwiches in our school lunch boxes. It was much cheaper, but tasted exactly like ham spread.

The amount of each isn’t crucial. You needed a meat grinder. Ours fastened onto the kitchen counter. Grind up the hunk of Bologna in the meat grinder and the sweet pickles too. Mix enough salad dressing in to make it spread easily on the sandwiches. Done!

We never put boiled eggs in it but other people did. The boiled eggs were used another day for egg salad sandwiches. Our bread back then was often Rainbow brand or Sunbeam.

With six children, packing the lunch boxes on a school day took teamwork. Someone would get the cookies and wrap them for each box. Another child would get the fruit (a banana, an apple, or some raisins). Someone else assembled the sandwiches, then cut them in half.

I was good at wrapping the sandwiches with the wax paper. Mom had taught me how to make the double fold where the edges came together, just like the butcher would wrap meat at the supermarket. Then I’d make a triangle at each end and fold that to the back.

We had those metal lunch boxes with colorful designs of our favorite television shows. I browsed around on Etsy which is a good place to find vintage items. Wow, some of these are for sale for over $100. I should have saved mine.

Did you have a rectangular metal lunch box like these?

The beach pictures in our family album are few and far between. Kansas was a shallow sea back 85 million years ago but no photos of our family go back that far. The Martins, Joys, Kennedys, Vinings, and McGhees were later arrivals from 1850s onward. By that time, it was all prairie and some rolling hills.

Below is the challenge photo that started me looking for beach pictures.

My parents, Gail and Clyde Martin, were awed by Lake Erie when then visited me in the mid-1970s in Ohio. It looks like in this photo that Dad is about to get his shoes wet.

Another time, they visited us when we lived in South Texas. Our outing to South Padre Island resulted in more beach pictures. Mom was quick to shed her shoes and start hunting for shells. This would be in the early 1990s.

Here are other members of the family at the ocean, lake, or even a creek.