(post by Ginger Allain) Growing up in the country, I remember a vintage wheel that served as a trellis in our yard. Mom grew clematis on it. We have few photos from that time, mostly black-and-white ones. 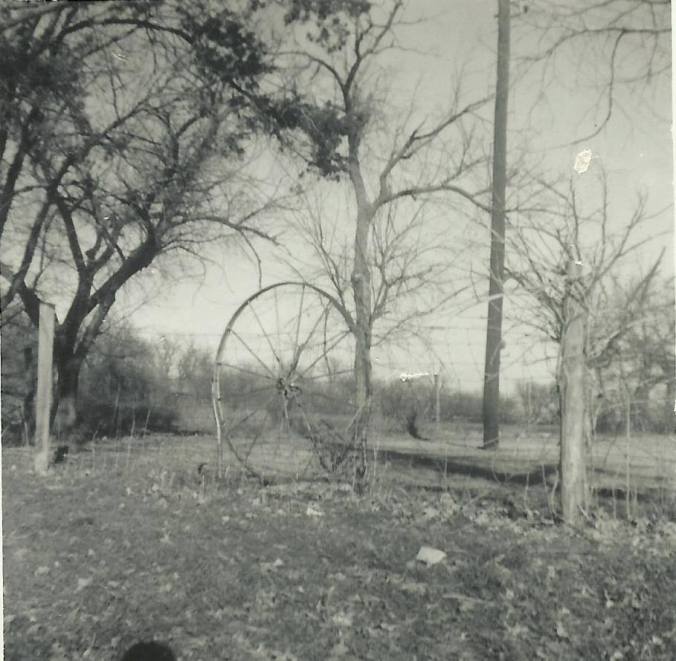 In examining the photo, my sister and I decided it wasn’t a wagon wheel or a buggy wheel. It seemed too high and too slender for either of those.

An octogenarian helped us out by identifying it as the wheel of a farm implement called a hay rake.

This was in 1945 before the war ended. The baler needed one man on the tractor and two on the baler, one tying the wires and one poking the wires. The owner of the ranch couldn’t get anybody to tie the wires, my dad told him I could tie the wires. He said he would pay me six bits an hour, dad told him “you will pay him one dollar an hour, a man’s wages for a man’s work, or look for two men.” He said OK. I worked all summer. My earnings bought me a horse and saddle.”

I checked for a picture of a hay rake and finally found one in a newspaper from 1900.

3 thoughts on “The Wheel from an Old Hay Rake”

In the Army Now

In participating in the Sepia Saturday picture challenge, I rummaged about hunting a photo of soldiers. I’d already shared this one of my mother’s cousin. You can read more about Ralph Vining’s fascinating life here. It was a good match for the photo prompt that showed a moment of light-hearted camaraderie among soldiers. I’m guessing […]