The memory prompt was “Who was your favorite teacher? Why?”

Mom wrote, “Brownie Dillman, my first man teacher who taught us gymnastics during recess. He was tall and slim like my Daddy and dressed casually. In the winter he wore sweater vests or long-sleeved sweaters.”

Here are some of Gail’s school friends performing acrobatics at Noller School in Greenwood County, Kansas. This would have been in the 1930s.

In the blog challenge, they asked “If you could have 3 people to dinner tonight, who would you invite?” This is a good mental exercise.

Would Mom invite a favorite baseball player? They followed several teams on TV, so I’m not even sure if there was one player that really stood out for them.

Maybe she would ask an author like Mary Higgins Clark. When she read her first book by this popular author, I remember hearing a blow-by-blow account of the action. There were plenty of vintage authors that she loved to read and re-read. One was Margaret Hill McCarter, but she also liked Harold Bell Wright, Zane Grey and others. Would she want to sit down to dinner with one of these and ask questions about their writing?

I’m guessing she would like to meet one of her ancestors, like her great-grandfather who served in the Civil War. He survived six months in Andersonville and lived into his nineties. She wrote an article about him for the Kanshistique magazine. We were collaborating on a book about his life. How marvelous it would be to have all our mysteries solved by asking him about his experiences.

Another person that she would surely want at her dinner is her father, Clarence McGhee. She remembers being a “daddy’s girl,” tagging along with her beloved dad. Maybe they are all together in heaven having a good chat.

One final person for this special dinner would be Amelia Earhart. Mom greatly admired her and I’ll write another post about Mom wanting to learn to fly.

I’d volunteer as the chef for this special dinner, just so I could overhear what they discuss. Should be fascinating.

I’ve been scanning old photos, so here’s one to share with you. It is the prairie version of the old bear rug photo. I sure hope that wasn’t a patch of poison ivy that she’s sitting in.

I’m guessing this is one of their camping excursions. They had a small cabin and Mom’s father fished for catfish in the Cottonwood River. You can read Mom’s memories of those special times (posted on Our Echo).

Here’s an oldie. Mom must have been just 2 or 3 years old here.

I’ve been lax about keeping up with the Blog Every Day in May challenge. It has inspired me to write more here than I might otherwise. The topic for today is “What’s on your plate?” Now I could write about food, but the question makes me think of all the things I want to get done.

Mom and I were collaborating on two family books before she died. One was about her aunt, Bertha McGhee, and the other was about her great-grandfather, Abraham Bates Tower. She had some primary source material on both of them and some memories of her aunt.

I rue that I didn’t ask her more questions on the two topics. She had sent home with me the letters, the diary, and other notes, photos and memorabilia on the two relatives. I’ve been diligently researching and reading up on background information to add to the books.

It feels like a huge project, so I need to break each one down into sections and focus on working my way through a section at a time. Maybe then I won’t feel so ineffectual in the progress on the books. I’ve been dragging my feet on transcribing 40 years of Aunt Bertha’s letters. Fortunately her handwriting is fairly clear. I need to do it soon, as there are still some relatives who can answer questions that may turn up from the letters. 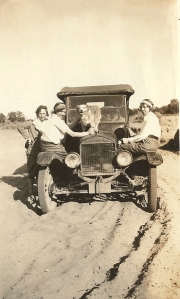 Here’s Bertha McGhee (on the right) in New Mexico with some of the other teachers from the Navajo school.

Here’s my mother, Gail Lee Martin, wearing a maternity smock, so another baby is on the way. Her children (left to right) are Susan, Cindy, Ginger and Owen. The soon-to-arrive child is Karen. That dates this photo to sometime before June 1952.

To the right is her mother-in-law, Cora (Joy) Martin. The photo shows them in Reading, Kansas, where Cora and Ren lived before they retired to Emporia.

I heard that the Reading house became a cafe, but suffered so much damage in the 2011 tornado that it required demolition. When I looked at the newspaper’s slide show of the tornado damage, there’s a vintage purple-painted house in several photos and the twisted sign from The Miracle Cafe. I’m not sure if it is the same house. The details of the front porch don’t seem the same.

I have no idea why I’m wearing a stocking cap on what is obviously a spring day. I’m holding a vintage doll that may have belonged to my grandmother. The bright sun is making us squint.

Gail Martin with her children and her mother-in-law, Cora Joy Martin.

A front porch always makes me nostalgic as it probably taps into memories like this. Remember sitting on the front porch back when?

Growing up in the Kansas Flint Hills gave Mom an appreciation for the rolling prairie vistas and for the big Kansas sky filled with puffy white thunderheads. She became poetic when talking about the sight of a prairie fire with flames outlining the hillside against the backdrop of the dark sky.

Mom’s earliest days were in the Teterville area. Below is a picture of her with her mother, Ruth Vining McGhee in 1927. Here’s Mom’s description of this time, “Although jobs were scarce all across America, the oilfields of Greenwood County were booming. Those early years in the Teterville area were very prosperous.

Mother’s two sisters with their big families moved from Woodward, Oklahoma to Teterville. They were her older sisters, Lucy and Bessie who married the Bolte brothers, Charley and Ed. My cousins were all older than me. They came to Kansas to find work. Even Uncle Ed’s older sons found roughnecking jobs in the oilfield and wives to marry.”

Life became fun with all these relatives visiting us. When Mother’s cousin, Ed Babcock, came, he brought his guitar. Many evenings were spent singing while Ed strummed.”

That wasn’t all. “Mother’s brother, Albert Vining and his wife, Vina, who was Daddy’s cousin on the Tower side, came from Tyro, Kansas. They were my favorites as we shared a special occasion.

The day they were married, September 13, 1924, was the day I was born. Mother was to be Vina’s matron of honor, only she was giving birth to me. They got married anyway. I always told everyone I was born on Friday the 13th, but Aunt Vina insists it was Saturday.”

The oil boom didn’t last. Mom says, “I don’t remember them all staying in that area as long as we did. Daddy’s job was pumping the oil. Most of the others were involved in the drilling end of the industry.”

Rustic Wood with Heart by DizzyDebbieRead more about Teterville’s early history.
I also have a page about Vina Vining’s life. She lived into her nineties.

Maybe we should all make a list of truths that we discover during our lives. We could leave these lists for our children to guide them through the pitfalls they are sure to encounter.

In trying to think what life tip my mother might wish for me to know, my mind swirled around the importance of reading, of writing, of memories… Perhaps she would have said:

A good book will last you longer than a tidy house. Hmm, that doesn’t flow quite right. How about “Do what you love and don’t worry about cooking and cleaning.”

Mom often raced to get a meal on the table for her hungry husband and six children. Supper time sneaked up on her as she worked on a craft project, read a book or helped a child with their 4-H activity.

Although we loved her pot roast and the pancakes made in creative shapes, we’ll probably remember most the hours she spent showing us how to make a butterfly net or driving us to a remote location where we could find geodes for our rock collection.

As I turn the page of the book I’m reading, I silently thank my mother and father for being readers. They set the example in our home and all their children became lifelong lovers of books.

My whole career evolved from a love of reading. I spent thirty years as a librarian ensuring that communities had access to books through their public library.

We may not have had the neatest house around and our meals weren’t always on time, but we learned to create things and to love books. That’s a legacy that I’m glad I have. 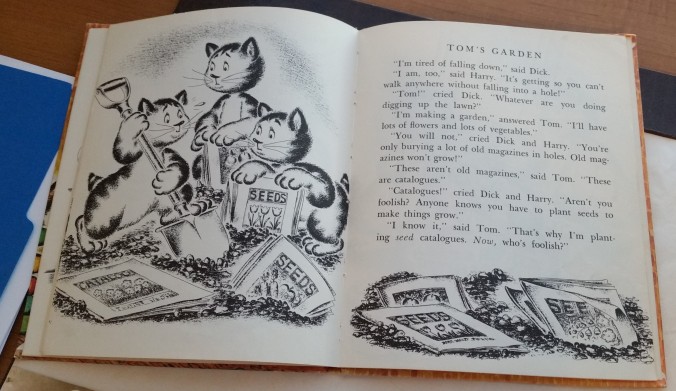 I’m trying to remember some of the sayings that Mom sometimes used. Some were universal to moms everywhere. Here’s 5 for this Friday.

Don’t we look like little angels? Who knows how much effort it took for her to get us all dressed in our Easter Sunday finery.

If you’d like to see more, check out this page of sayings called Momisms.

It seems I get haphazard in my postings when I don’t have a challenge goading me on. Luckily I stumbled on one called Blog Every Day in May. It even offers prompts to inspire you.

The theme for today is “Share a book that you’d like to read, but haven’t yet. What draws you to it?”

I have one that’s calling to me. It’s from my mother’s bookshelf of Kansas authors. The title is They Named Me Ethel and the author is Ethel Adams June. The memoir tells of a 1920s childhood growing up on a farm southeast of Wichita, Kansas, near Mulvane.

Ethel was born in 1914, so a decade before my mom. I’m looking forward to seeing to sharing her approach to her memories and comparing her style to Mom’s. I already peeked into one chapter and see that she wrote about having a pet rooster. That reminds me of Grandma’s pet hen in one of Mom’s stories, The Day the Mad Dog Came.”

Mom and Dad always had more books than would fit on the bookshelves. There were stacks of books on side tables and on the floor next to the television.

Sadly, many families have a stash of unlabeled ancestor photos. They end up wondering, “who are these people?” Sadly, some end up tossing them out when they get discouraged over identifying the mystery photos. The ones I’m sharing here today are women’s photos sent to me by my distant DNA cousin. Our connection is through […]

A newspaper advertisement in the 1921 Kansas City Star reminded me of my grandmother and a dress she had. It was the time when hemlines were on their way up and it was acceptable to show a little of the ankle. Women were no longer constrained by the bustle or hoopskirt of earlier generations. gingham […]

Lois Adelaide Joy was the third daughter born to George Washington Joy and Dacy Richards. Lois’ younger brother, Alfred Joy was my great-grandfather. She was born September 25, 1867 in Vinland in the eastern part of the new state of Kansas. Her older sister, Mary Frances Joy, died when Lois was just one. More sisters […]